Releasing Penarium was as far as I planned 2015. Well. That happened and a whole lot more. Here’s what went down this year and what is going to change in 2016. The biggest one being a major shift in focus as an artist.

First off. I beat Game Developers Conference this year. I say that because the one the year before was not a good trip for me at all. First time in San Francisco, First time at a big convention, First time I had a game to hustle. After that trip I wrote down everything that bugged me and learned from it. GDC 2015 was bliss. Mostly because I stopped giving a crap. I became free and I could start being myself. I visited Japantown which has a papercraft store. Everywhere around me were magnificent sculptures of origami and other techniques. What caught me were little robots made from folded straws, which were called Piperoids. It fascinated me that you could make figures out of paper.

A few months later we finished and released Penarium. What a relief. Finally a game I can tell my family about. “What do I do?” I make games. Just look at your Playstation uncle Benny. Yes it’s done. It’s finally done. The game’s on there. Despite its somewhat low sales I am proud about the fact I worked in a team and we finished a game. I still can’t live off games but we made a game the way we wanted to. Many reviews were positive, some of them were negative but we delivered. Now what?

A friend of mine asked me “What do you ultimately want to achieve as a game maker?” I never heard that question before. Not even from myself. I was caught surprised but I was even more surprised by how fast I came up with a focused answer: To make a game and a world of which people will say “That’s his game”. That’s the next step after Penarium and it’s a battle I’ve been fighting for years. The closest I got to it was Mutant Gangland.

This is the year me and Zapa stopped development on Mutant Gangland, A turn-based strategy game that looks like a mix between Advance Wars and Ninja Turtles. Last year we put it in early access and sold a few copies. It became a game where I could unload my love for wacky action figures and comics. Mostly those of Toxic Crusaders and Ninja Turtles. Then Zapa got busy. Actually, He got a day job. Without a programmer the game was dead in the water. A shame because I grew attached to the wasteland world I created. I closed the door on yet another game. This happened to me too often.

Months later I read a Turtles comic and was reminded by how full of juvenile energy it is. I wanted to recreate that energy so I contacted Zapa. After a good talk he gave me the freedom to whatever I wanted with Mutant Gangland. It was now 100% mine. It just wasn’t done yet. far from it. But the door was open again.

I want to release Mutant Gangland one day. Release that game with my world in it. Give the people what they paid for. It bugs me every day that I have not yet delivered but it will be done. The real question is what kind of game it will be. After talking to some developers I discovered I simply did not have the funds to make a complete turn based strategy game. However; With the world I created I wouldn’t have to. It could be whatever as long as it’s a good vehicle for cool looking characters and a compelling setting. And the visual style? I’m strongly pondering that subject. Right now Mutant Gangland is pure pixel art and I’m tired and wary of using pixel art.

Years ago during a internship at a mobile games company I started doing pixel art and I’ve been using it ever since. What appealed to me about it was its satisfying learning curve. Once I understood the rules it was even more fun to do. I did several pixel art projects over the years while growing slowly. This to a point I wouldn’t even question the use of it. That autopilot is a bad situation.

There’s been some talk among the Penarium team about wether a non-pixel art 2D style might have helped the game’s reception. There’s no way of telling. Two of this year’s most critically acclaimed games are made of pixelart but I can’t help wondering if Penarium’s style made people put it in a certain corner. You could argue that pixel art is a medium but that’s unfortunate when many consider it a style. It’s associated with retro gaming and deliberate ‘indie’-ness. Maybe people saw Penarium as indie retro platformer nr 3453. Because Mutant Gangland was inspired on the style of Advance Wars. That style started to direct Mutant Gangland’s themes and story. I think it should be the other way around.

But all of that won’t matter if I can’t find a developer. I’ll always need someone to realise that goal of making The Thomas Game. During its development I was curious to see how some of the characters would look as a toy. Something to have on my desk. I contacted several 3D artists with a design I made. Asking if they could make it in 3D. None of them delivered. It was frustrating to need somebody to realise my ideas again. Something had to change. (hint: it was me. I had to change)

Late 2015 I played around with program called Crocotile which lets you place pixel art tiles in a 3D environment. This seemed like the perfect transition between easily understandable pixel art and the scary world of 3D interfaces. It almost looked like you could fold them because all the tiles have the same sizes. It was just cubes and cubes and cubes. I closed the program. Opened Photoshop. Made some pixel art squares and printed it on a paper. Then I folded and glued them and made this. 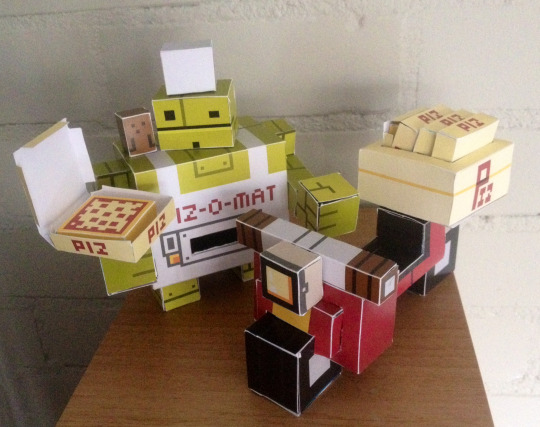 Something clicked when I assembled that pizza robot. The Piperoids I saw in San Francisco had been brewing in the back of my head for a long time. They got me wondering wether I could start making three-dimensional tangible things myself. I was able to make something without needing a developer, which is my greatest frustration with game making. Also I could make this with all the skills I already possessed. In 2016 I will make a whole street with robots like these. Food vendors called The O-bots. How does this relate to Mutant Gangland? Remember when I said Mutant Gangland’s current style commanded the substance? Let’s flip that.

Everything that’s awesome about Mutant Gangland’s made up universe comes from comics and toys. That’s something to consider in 2016. As part of that I want to explore the action figure realm and make Mutant Gangland action figures. That’s my resolution for 2016. For that I will have to learn 3D. Last week I started following a class at my good friends at Reptile. Next year will be full of 3D adventure. Which brings me to the last game I’ll probably do in 2D pixel art. 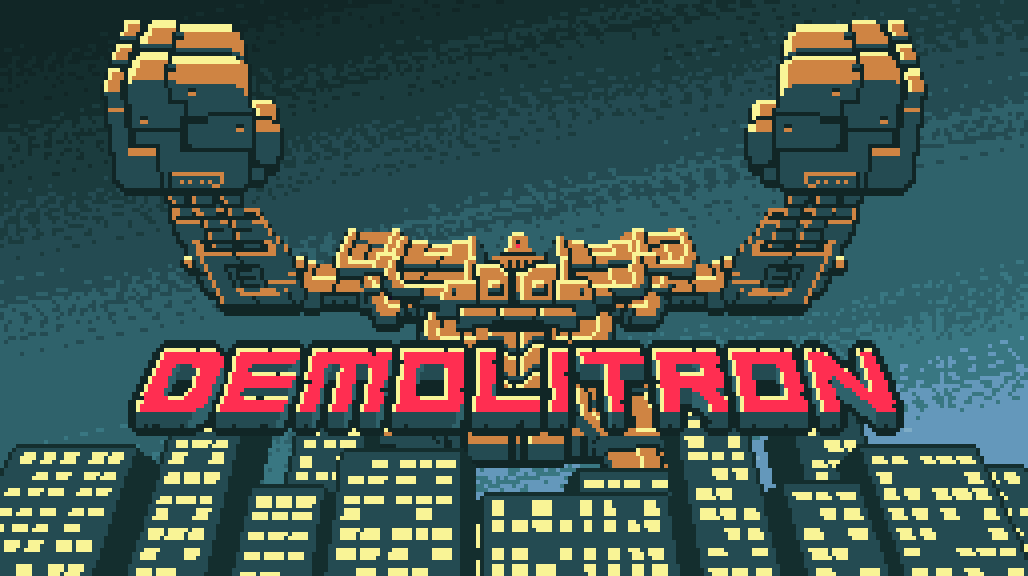 I did some game  jamming this year and one in particular stuck out: City Crushers. a time attack game where you play a giant robot crushing cities. Made with Laurent Victorino. When the jam was over I still wanted to finish the game. In 2016 I want to make an expanded version of the game. renamed Demolitron.The reason I want to bring this out badly is because even more like Penarium this feels like a concept that came from myself rather than a large team. It’s the next logical step after Penarium. This is also the frst game in a while where I am responsible for the game design. Something I like doing even more than doing game art. Most important of all: I want to BEAT that curse of personal games not getting finished.

You might ask yourself why I don’t start learning how to code.  I have been learning. I’m also terrible at it. I have some talents and programming is just not one of them. Truth is most of the time my mind is a scrambled mess. A tornado of distractions. There are some activities that manage to hypnotise me away from that tornado. Pixel art was that for me and the same counts for 3D and papercraft.

It’s been a good year for me. Having released a game that I am largely responsible for plays the big part in that and I’m proud of just finishing something for once. My resolutions for 2016 may seem silly but it signals a shift in focus. from games to toys, from 2D to 3D, from dependancy to autonomy.  Mutant Gangland and O-bot figures are the most exciting projects ever right now. Something I can do all by myself. Demolitron should also see release.Of course, This is what I PLAN to do. We never really know what life will throw at us. If a nice project comes by I might jump on board. Just like that.

ATTENTION: From now on I’ll be doing regular updates about my adventures through emails. These will be more casual and personal. If you want to be on that list then enter your address below. See you in 2016!