Good news! Me and my friends have agreed with Team17 to publish Penarium. Being on the project from the start by doing all the artwork and seeing it evolve was pretty cool. The fact that a big company has the faith to put their name on it is also cool. I’m proud but I have to say that it hasn’t really sinked in yet. Probably because we have so much stuff to do yet. I will tell you how it was for me as an artist.

About a year ago my friend and former-classmate Rick came to me with a neat idea for a platformer game in a dark circus theme. I was instantly excited because the 19th century circus has always intrigued me, Especially in video games. It’s a place where weirdness meets fear and nostalgia, A nostalgia for a time I never even lived in. I thought “Yes, We should make this game together.”

It was time to start pixelating but where did I start? The colours. For my pixel art I use a limited number of colours. I’t maker for small files and easier restyling if needed. I figured I needed some colours that were associated with the theme. Which is the 20’s if I wanted to get the game’s theme across. It’s hard to put a finger on what exactly is a colour linked with a time period. It’s very subjective. Generally if you watch a movie and you see a colour in the background or on somebody’s dress and it hits you then that’s a good indication that you’re on the right track. I myself got hit a lot when I watched the TV show Carnivale which is about a circus traveling the US in the 1930’s.

I paid attention to the things happening in the background. Stopped the screen and took color notes (which is just picking a color in Photoshop). With those colours I started working on the game’s player sprite. We wanted to create an unusual hero.  One whose juxtaposition between his physique and his athletic performance would create a comical effect but most important: One you felt sympathy for when he would die. I created a round shaped character in the line of Laurel and Hardy. Slapstick is a form of comedy from another age but it’s very present in Penarium. There are so many ways the player can come to an end and so Penarium is kinda what you’d get if Laurel and Hardy was really really brutal. I gave him a red hairdo because I have a friend who worked at a circus fair who also had red hair. Yes. It’s just that simple. My friends name is Wilco, We call him Willy. And so the name for the game’s character was born. 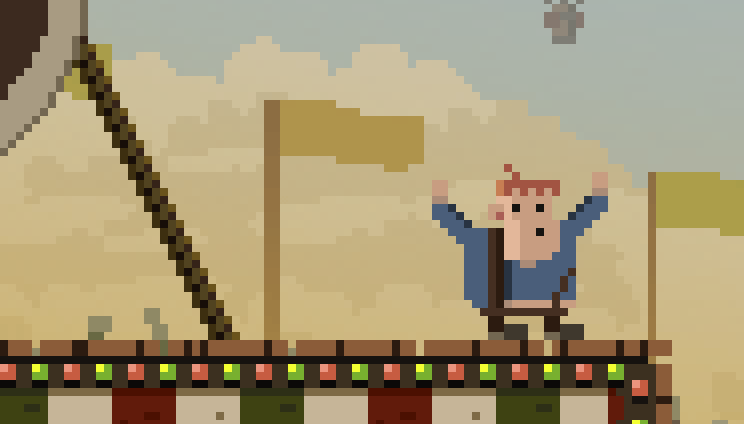 When he’s not being chased by death machines Willy is actually quite cheery.

Then there was the level background. It had to be circus-like and there had to be some audience. I started pixelating everything and it took a while for me to get something nice on the screen. At first I tried to draw everything on a big canvas of 800×600. but I wasn’t good enough at pixel art to bring detail to such a giant screen. It would be a lot of work. I proposed to make the game 400×300 instead and just scale up every pixel to twice its size. We did. And the game got its current chunky pixel look. First I tried to make some indoor levels. With a circus tent an all. Didn’t really work. Then I tried to do an outdoor level at night because this game was going to be ‘dark’. It worked for a while and we developed and tested the game for quite some time with a beautiful nighttime level with spotlights and lit-up clouds and a starry heaven. And for a time all was good.

From a time where the deathtrap circus was the only form of entertainment.

Then. After a while, As if fate demanded it. We started questioning it again. We asked “Is this right?”. It was not right. At that time we did not know what platform Penarium was going to be released upon but we would want to showcase our game on events to potential investors. The quickest way to do that was to have the game ready on our phone so we could whip it out during a conversation. I figured that if this game was going to be mobile then we needed to change the level background. Mobile players have to be able to play their games anywhere anytime, That means outside during the day. That means screen glare. The nighttime level wouldn’t cause the screen to light up enough so people would have trouble seeing what’s going on at the screen. We changed it to a bright daytime level.

I make it sound like smooth sailing don’t I? For the most part this project is fun to work on but I had my share of nightmares! Like the old animation system. To amplify the sense of spectacle we aim to make the player’s demise visually gruesome. It was my job to make a separate specific death animation for every single obstacle in the game. Imagine a guy being blown to pieces by a rocket. There’s blood and body parts flying in every direction. Right? The problem was that these animations could only fit in a very small frame. I spent a long hard week making about 20 different animations while biting my knuckles out of frustration with the small frame. And then we used none of them. Was I mad? No.

We tested it but found out that with this fast-paced platformer there were a lot of situations where the death animations did not cope with the the moment. After that I just made a separate head, separate limbs and some body parts, Which we call ‘gibs’, and we put it in the game. This time we let the game do the animation. For example: When Willy gets hit by a giant bowling ball the game calculates how hard he gets hit and from what direction. Then it lets blood and gibs fly around based on that. It’s a rough version of physics we apply to a lot of things in the game. Like our water. But that is a story for another time.

More things like these tend to pop up over a game’s production but there are three things that pull me through this: I like the setting of the game. I like the people I work with and I think Penarium is a super fun game to play. If any joy or despair comes up I will certainly share it on Twitter. See you in the circus.